When we are upset or stressed our breathing becomes quick and shallow. Breathing deeply and slowly instantly calms us down mentally as well as physically.

The Importance of proper Breathing

For more than 20 years, the Swiss Escape Clinic in Schöftland has been successfully treating opiate dependency in patients who have sometimes traveled from far abroad for a scheduled withdrawal. The private clinic has now decided to exhibit and utilize a specific kind of artwork, designedly placed in the guests‘ lounge: a breathing picture by the Swiss artist Stan Adard. Breathing pictures are a new, digital art form. At first glance, they look like conventional abstract paintings. The more consciously and quietly one contemplates them, however, the more a gentle movement reveals itself—a movement which mimics the rhythmic breathing of the viewer. 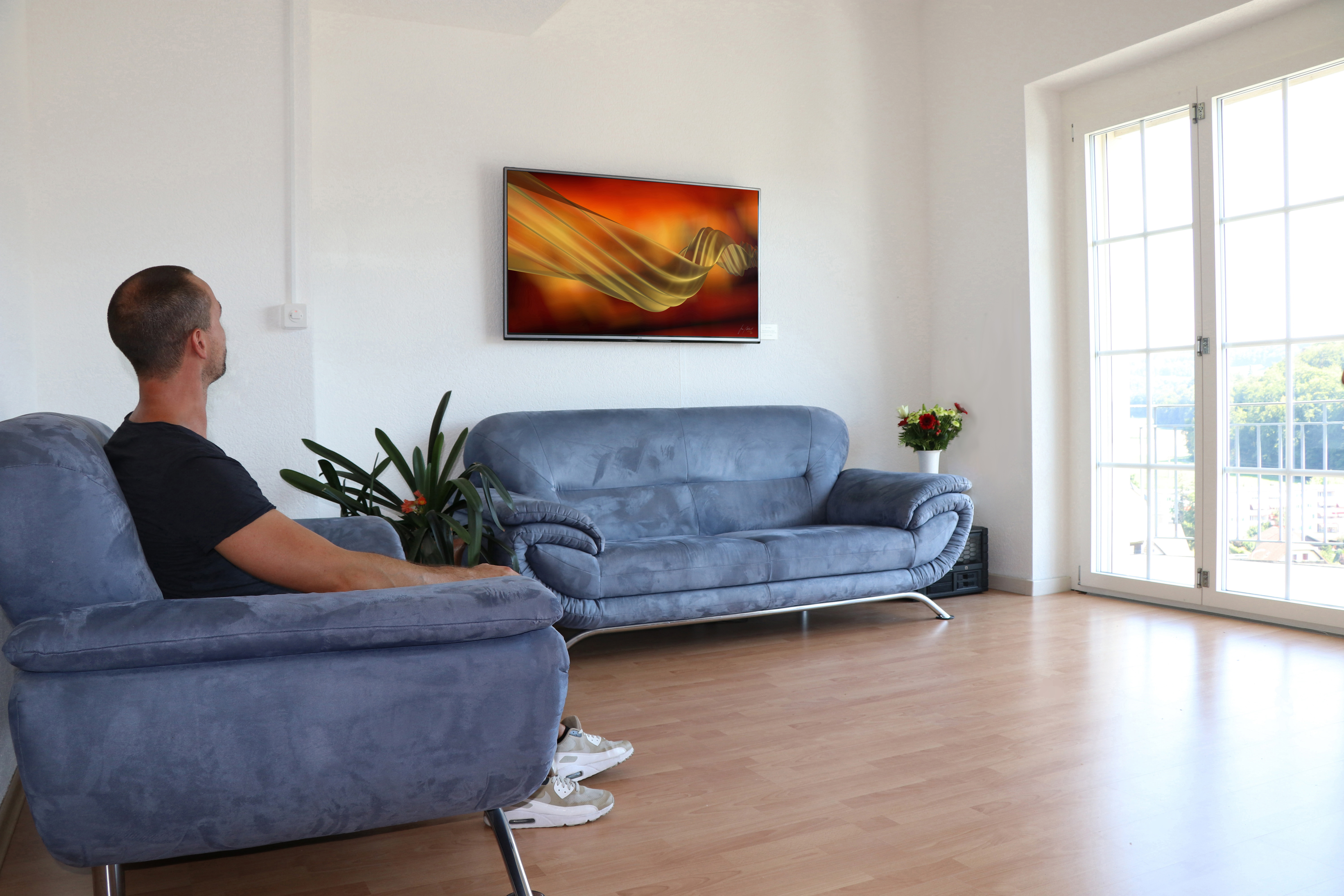 What are ‚breathing pictures‘?

Breathing pictures are abstract, digital paintings to which the dimension of time has been added. This addition allows amorphous shapes to move, which Adard then uses for the gentle implementation of various respiratory rhythms.

The primary allure of this work lies in how a digital painting is inserted into a context where the viewer, passing by, initially perceives only an ordinary, static image. It takes a moment of rest to recognize the movements in the object of observation. After a short while, the viewer can adjust his or her own breath to the breathing pattern of the picture. Doing this, the breath becomes calmer and the digital painting can be experienced in its many facets. These works offer an intense visual experience, transcending the possibilities present in more conventional images.

Stan Adard lives with his wife in Solothurn Kienberg. He studied social pedagogy and social psychology in Zurich. In the early 1980s, he took advantage of the burgeoning market for home computers to build a software company, which he sold in 2014. During these years, in the context of the demanding IT industry, he learned the importance of conscious breathing for a positive, well-balanced life.

In addition to his studies in Far Eastern meditation, Adard started to work with software that generates three-dimensional environments. Knowledge of the breath, and the ability to create three-dimensional, animated objects, have combined in the creation of breathing pictures. These breathing pictures have already been attracting international attention, most notably in the U.S.

For Adard, conscious breathing, increased awareness, and art are intimately linked. The artist is delighted by the request of Escape Clinic to install a breathing picture in the meeting room. “As much as any private living room, a hospital provides an excellent environment for receiving the full impact of these digital mentors,“ he says. „I’m looking forward to seeing how people in troubled circumstances will react to the pictures.“

Fabian Stucki, Operative Director of the clinic against opiate dependence, is also attracted by the concept and the design of the works: „These images fit perfectly in our hospital. They bring a unique atmosphere of tranquility into our meeting room. “

The Escape Clinic, founded in 1996, specializes in a fast, gentle, and discreet egress from opiate addiction. In addition to providing an individually-structured withdrawal program that includes follow-up care, the clinic attaches great importance to maintaining a pleasant environment for its local and international guests.